Good software does not come about just like that; by mere coincidence. Inside a streamlined and well-executed software development process, there are many patterns for success. Some of them extend well beyond what is traditionally considered to be the realm of the software developer.

Inside our organization, many of these patterns were applied either consciously or subconsciously. We felt the need to bring these patterns forward from under lock and key into the clear light of day for everyone's awareness.

After months of gathering, slicing, dicing and eventual distilling, we arrived at what we consider to be the 'Essentials', distributed as a pack of flash cards.

Price: € 10 excl. delivery costs. Only shipped in the Netherlands. 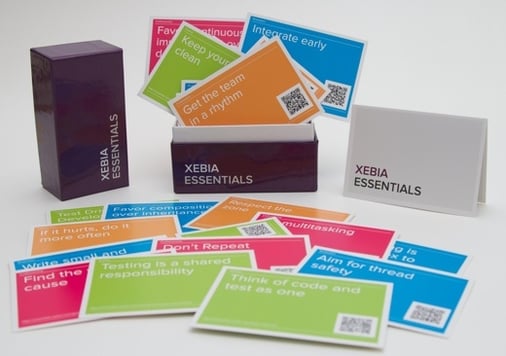 Reviews from other clients

Working on my #blindspots after a while in a project: where could we improve thing further? (using @XebiaAcademy essentials cards) pic.twitter.com/9Ylw18lYpK

This is funny. I just used them in a Retro earlier this week, for the first time since bringing them from #p4a 2017. It worked great! pic.twitter.com/D9lIv2Aomx

How did you use them?

We defined 4 areas:
- Already doing great
- Should improve
- What does that even mean?
- Won‘t consider this for now

Then we discussed and assigned the cards to these areas (1-2-all), voted for the most relevant and decided on improvement measures.

Worked well as an outstanding Retro, focusing on more general topics than usual.